Along the 31st Parallel > No More Deaths 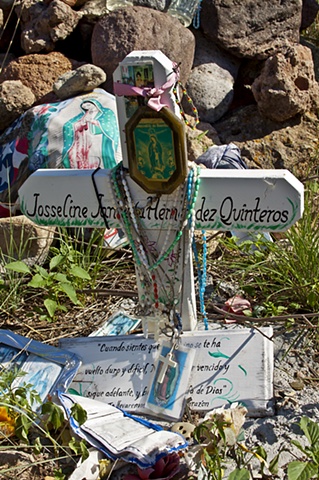 The shrine marks the remote area where Josseline Jamileth Hernandez Quiteros body was found. This 14 year old girl, unable to keep up with her group was left behind in the Desert. She was from El Salvador and traveling to Los Angeles with her younger brother, with the hope of being united with their Mother. Unable to keep up with her group, the Coyote, made the decision to leave her behind. Her little brother wanted to stay with her, but on her insistence traveled onward to be with their Mother. Josseline was left with some food, and water, where three trails intersected, and the Coyote "knew" she would be found. No body ever came, until after she died from hypothermia, February 20, 2008. This case was an incentive to NMD to keep active patrols all year long. The cold Arizona winter nights claim lives as do the hot summer days.